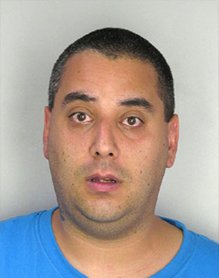 Meet Joshua Basso, a 29-year-old from Tampa, Florida. Joshua was recently jailed for allegedly placing several obscene calls to 911 operators, asking dispatchers to talk to him while he masturbated.

From The Weekly Vice:

When officers arrived at his home, Basso initially denied that he called 911 and refused to turn his phone over. An officer then dialed the number that called 911 from her personal cell phone and Basso’s phone rang in his pocket while he was standing next to her. He then reportedly admitted to making the obscene calls.

This is another classic example of someone who has broken the “don’t-do-something-really-stupid”-rule, because if you do something really stupid it’ll probably end up on the internet. I wonder what happens if Joshua Basso’s next employer does a quick Google search for his name.

Why am I writing about this guy? It was a great reference for something that happened yesterday when me and Anniken went to a birthday party. There we met a guy who I’m a bit worried might end up like Joshua Basso one day. Anniken had never met him before, and one of the first things he asked her was if she’d helped paint the living room we were sitting stripped down to her underwear. A great way to start a conversation. I’ve heard about ice breakers, but this guy took it to the next level.

Everything went downhill for him from there on: After several unsuccessful attempts on chatting up every girl at the party, and doing a little strip tease, he showed his butt to everyone who wanted to see on the tram towards downtown. This was just after he asked one of the girls from the party if she squirted. While her boyfriend was sitting next to her, telling the romantic story about how they first met.

In his defense, he admitted that he had some serious problems when it came to talking to the opposite sex. Yes, we also noticed that somehow. The reason was that he had no female friends and all his co-workers were guys. So when he partied, he basically just entered a pattern of circus tricks his beer belching Neanderthal friends probably enjoy.

Do you have any thoughts you want to share? A question, maybe? Or is something in this post just plainly wrong? Then please send an e-mail to vegard at vegard dot net with your input. You can also use any of the other points of contact listed on the About page.
gennialt!! GO BASSO!!! AND BASSO JR
And you got married how??
←  Sicko More Invites  →
Caution