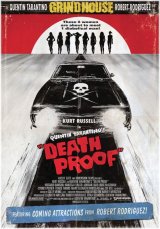 Death Proof is Quentin Tarantino’s latest movie. It was originally meant as one of two full length feature horror movies put together as a two film feature; Grindhouse. The second movie, “Planet Terror” by Robert Rodriguez, was for reasons unknown dropped when Grindhouse was released in Norway and only Death Proof was shown. No two film feature for you! The Death Proof movie poster even stated that we would see “coming attractions from Robert Rodriguez”, so I have to admit I felt a somewhat cheated when it turned out that was not the case.

In Death Proof we meet Kurt Russell as Stuntman Mike, a very enjoyable, but mentally challenged character. Friendly at first, he turns out to be that guy you really wish you never met. Stuntman Mike, the brother of Stuntman Bob, likes to stalk young and sexy women, and there are a lot of young and sexy women in this movie. The main issue with these women is that they talk too much. They talk all the time.

The characters in Tarantino’s movies tend to talk most all the time, and he is known for writing great dialogs - examples are Reservoir Dogs and of course Pulp Fiction. But except for a few bright moments, the dialog in Death Proof is on a level that you just want it to stop. Stuntman Mike has some really good lines, though. The edited version, probably the version that is being shown together with Planet Terror, is almost 40 minutes shorter than the full length version I saw. I suspect that the edited version contains less talk and so it probably would have suited me better.

As with most of the movies he is directing, Tarantino has a small role in this one as well, as Tim the Bartender. It has become a sort of a trademark for him, and it works well. This time he is not even killed, like in Reservoir Dogs and From Dusk Till Dawn. Tarantino also references heavily to his two Kill Bill movies in Death Proof. One of the girls has a song from Kill Bill Vol. 1 as the ring tone on her cell phone and the sheriff and his son from Kill Bill Vol. 1 have also made it to Death Proof. There are probably a million other references to Tarantino’s other movies as well, but those were the two I spotted.

Do I recommend Death Proof? If you like senseless and unmotivated violence on the silver screen - yes. If you like kittens and romantic comedies - no. If my assumption is correct, that the 90 minutes edited version is with less chit chat and the same amount of Tarantino style “special effects”, you should see that one instead.

Do you have any thoughts you want to share? A question, maybe? Or is something in this post just plainly wrong? Then please send an e-mail to vegard at vegard dot net with your input. You can also use any of the other points of contact listed on the About page.
I’m looking forward to the movie, but I’ll have to wait for the DVD. There’s no cinema within three hours here. this country sucks! :-D
Awh, you’ve got to watch it on the silver screen, man. Perhaps you should start a local cinema or something.
Another fine example of localization-fuck-up-yness is Equilibrium, which is called Cubic in my local rental store.
←  Late Night Rain  →
Caution