I Want To Move Someplace Safe 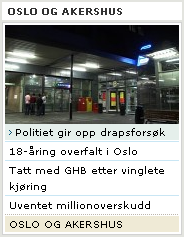 Compared to most other capitals, Oslo ranks as a tiny village in size. Despite of that, the city is, like most capitals, struggling with unemployment, poverty and crime. There are parts of the city you should avoid after dark. Right now there’s a guy - or perhaps even two - who is running around trying to rape everything that moves. It’s not as bad as Mexico City or Brasilia, but you get the idea.

Still, in spite of all the bad apples, the real threat is the police. At least if we are to judge by the heading of an article I read on the NRK site this morning. A screenshot of the heading can be found to the left. Translated to English it says “The police gives up on attempted murder”.

That the police is driving around in their patrol cars attempting to assassinate us is a bit disturbing, and the fact that they just gave up on attempted murder probably means that they will start doing it for real soon and that’s really disturbing.

Yeah, it’s just me trying to be funny by taking advantage of an ambiguous headline. But you grinned.

Anyhow… The R rated 300 trailer is loose on the interweb, make sure you have a look before it’s pulled. In case you wondered, the excellent sound track is Nine Inch Nails’ song “Just Like You Imagined”.

Do you have any thoughts you want to share? A question, maybe? Or is something in this post just plainly wrong? Then please send an e-mail to vegard at vegard dot net with your input. You can also use any of the other points of contact listed on the About page.
300’s going to be a blast, looks really sweet.
←  Stephen King: Cell Dictionary  →
Caution