Thanks to the Hallvard “Hawk Eye” Lid, I was lucky enough to attend a acoustic mini concert and album signing session by the Danish band Mew (Flash player required, join my campaign) today. I came a little late, but they played four or five songs while I was there, so I guess I didn’t miss much, considering the fact that their latest album only has ten tracks. They are not super-stars yet, at least not outside of Denmark, but I like them and a signed album cover is a cool thing to have. Maybe one day they’ll become world famous and I can sell my signed version of one of their first albums for tons and tons of money. Calling me a sell-out do you? They are also playing live tonight at Blæst (Norwegian site), but I’m working on my project report tomorrow, so I’m not going.

Anyways, here is what a signed Mew album cover looks like: 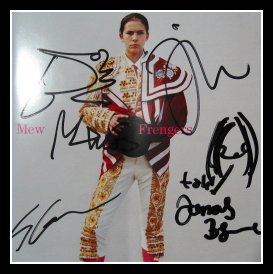 The 16th of May - that’s today if you haven’t already noticed - is traditionally party night in Norway. Since the 17th of May is national day and thus a holiday, people don’t have to go to work, meaning that they can all use the 16th to get really loaded. I’m usually one of them, but not this year. I’ve decided to devote as much time as possible to my project. The reason is that I’m not sure if I’m on schedule or not, so I prefer to work a lot and be done a couple of days before my deadline instead of being ten minutes late for it. Call me a party-pooper if you want. I’ll make up for it when I’m done with the project.

Inspired by a comment in the previous post, I had planned to write a couple of things about the band LIVE, but I think I’ll save it for later. Maybe tomorrow evening. Or maybe next month.

Do you have any thoughts you want to share? A question, maybe? Or is something in this post just plainly wrong? Then please send an e-mail to vegard at vegard dot net with your input. You can also use any of the other points of contact listed on the About page.
Just saw Bowling for Columbine.. and it made me wonder, why don’t norwegian banks offer a complimentary gun when you open a new account..??
I, for one, would have opened an account. Could I have a Desert Eagle, please?
←  Job-hunt progress Summer has officially opened!  →
Caution