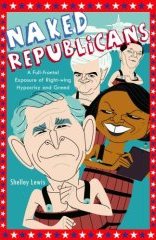 Author Shelley Lewis has written a book with a collection of short profiles of more that 50 of America’s right-wing politicians. As you probably figured out by the book’s cover1 and title, it’s not stories of grace and good deeds. Lewis drags every Republican she comes across through the dirt and no one is spared, even George W. has his own section - although he should probably have a whole book dedicated to him.

It’s a pity that “Naked Republicans” fails to entertain. Even if I do not know many of the politicians featured, the profiles should still be entertaining because most of them are completely off the scale. That these people are still allowed to roam free is a mystery. The profile about the politicians I know, like the Bush clan, is not very entertaining either. The problem might be that the profiles are so far off that you have to wonder if it’s really the real thing or an imaginary world created in the mind of a Democrat.

That the Democrats are now about to take control of America is probably a good idea, but I would be very surprised if it’s not possible for a Republican to write exactly the same kind of book about the Democrats in about a week. It’s not like all the Democrats are saints either - Bill Clinton comes to mind.

The most entertaining reading in this book is probably the opening quote by former President Theodore Roosevelt:

When they call the roll in the Senate, the senators do not know whether to answer “present” or “not guilty”.

I’m not sure if it was because of Shelley’s book and that she probably pissed of the majority of America’s Republicans, but on October 13 2006, Air America Radio filed for Chapter 11 Protection.