Now With Even More Mobile Phone!

First of all: My Twitter feed is a bit more active than this site has been lately. What about following me there? A brilliant idea! 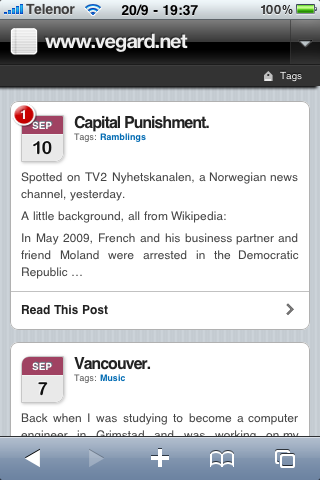 While browsing the interweb on my iPhone a while back, I came across a site using the WPtouch plugin for WordPress. It automagically displays your WordPress site in a more mobile-friendly way and everything works surprisingly well out of the box. It’s supposed to work well on not only the iPhone and Android handsets, but all kinds of mobile browsers. I’ve only tested on my iPhone and on someone’s HTC Hero, but it looked very nice on those two handsets. I’ve even taken the liberty to include a screen shot in this post. If you have a WordPress site, you need this plugin to better support everyone who is browsing your site on a mobile device.

And while we’re on the subject of mobile phones; I’m considering ditching my iPhone in favor of an Android handset. The HTC Hero has become rather popular at work and I’ve had the chance to play around with it for a while. So far, so good. According to the reviews I’ve read, the major drawback of the Hero is that it can be a bit laggy at times, but this has been addressed by HTC in a recent patch. Also, my first generation iPhone is getting slower and slower for each update Apple releases, opening the Messages application can take as much as half a minute some times.

The Android platform has quite a few good things going for it; one of the things I like the most is that you can have applications running in the background on your phone. This means that you can have an application like the new Spotify client or the closed beta Wimp client running in the background and still do other things, like sending a text message. Apple does not allow this on the iPhone to preserve battery. A good idea in theory, but it can also be very limiting for the application developers.

Another great thing is that Android is Java based, and I know Java (supposedly). This means I can create my own applications. I’ve already got an excellent idea for an application that has great potential of becoming an instant hit, at least in the Oslo area. No, it’s not another Trafikanten-client.

So it looks like it’s not a question of if I’m getting an Android handset or not, rather when I’m getting it. The HTC Hero is of course a nice phone and I would probably have gotten that one if it wasn’t for the fact that there are some very interesting things happening in terms of Android handsets in the not-so-distant future. Samsung will soon the launching its Samsung I7500 Galaxy in Norway, LG and Motorola have some models available and Sony Ericsson is supposed to have an Android phone in the pipe as well.