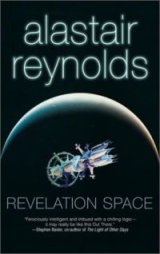 Science fiction is perhaps my favorite genre, not only when it comes to books, but also other forms of entertainment, like movies and computer games. Every now and then a science fiction book comes along that every fan of the genre should read. Alastair Reynolds’ “Revelation Space” is not such a book.

Dan Sylveste is a scientist obsessed with the Amarantin, an alien race that was suddenly wiped out nine hundred thousand years ago. Sylveste lives in a universe where human kind has colonized worlds far from Earth and has evolved into several sub-species like the Ultras who are a mix of man an machine.

Enormous space ships called Lighthuggers move between the colonized worlds at a speed very close to the speed of light while their crew is stored in reefersleep chambers. Aboard one of the Lighthuggers is Triumvir Ilia Volyova, she and the crew on a desperate mission to find Dan Sylveste and his father, Calvin, so they can heal the vessel’s Captain, who is ill with a viral infection that has taken over parts of the ship and is slowly, but steadily spreading.

Reynolds’ fictional universe is exciting, there is nothing wrong with his imagination. Hundreds of authors have written about cryogenic sleep before, I’m surprised he is able to find a new name for it; reefersleep. Some authors solve the problem of traveling the vast distance between planets simply by introducing portals that take you from point A to point B in an instant. Reynolds use a more feasible approach, the Lighthuggers.

I had some troubles getting into of Reynolds’ story telling. It starts off rather slow and the last hundred or so pages are plain boring at times. At the end I get the impressing the author is in such a hurry to finish the book he takes all kinds of improbable short cuts to explain the story’s mysteries. Since it’s science fiction, it’s supposed to be a bit improbable, but the last few pages are just too much.

There are a couple more books in by Alastair Reynolds in the same series, but I’m not sure if I’ll read them or not. In a way I’m tempted to give the author another chance because of the fascinating universe he creates, but if you’re not able to tell the story in the same fascinating way it’s sort of a lost cause.