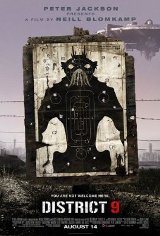 It’s been a while since I last posted a review. This doesn’t necessarily mean that I haven’t seen a single movie or read any books, it’s just that I’ve not written any reviews. These days I’m reading the fifth book in Stephen King’s epic The Dark Tower series. Great stuff.

But something even better than reading a Stephen King book is to watch Neill Blomkamp’s movie District 9. I’m pretty sure this is the best movie I’ve seen so far this year, and I won’t be surprised if no one will make a better before the year ends. Unless that movie 9 or maybe even Up can match it, that is. They’re very different movies, though.

Anyway, let’s get back to District 9. It all started with a short movie called “Alive in Joburg”, directed by South Africans Blomkamp and his friend Sharlto Copley. Because of Alive in Joburg, together with other work by Blomkamp, he was offered to work with the movie adaption of the Halo video game together with Peter Jackson. Unfortunately, the Halo movie was put on hold because of lack of funding. But this got Jackson and Blomkamp talking about other projects and result of that discussion is District 9. Here’s Alive in Joburg from YouTube:

If watching Alive in Joburg doesn’t make you want to run to the nearest cinema and watch District 9, I’ve taken the liberty to copy/paste an excerpt from the plot summary on Wikipedia:

In 1982, a large alien spaceship stops above Johannesburg, South Africa. Reports suggest that the ship became stranded after a command module separated from the ship and dropped to Earth, nowhere to be found. After cutting their way inside, an exploratory team discovers a large group of unhealthy and leaderless arthropod-like species. These alien creatures, derogatorily referred to as prawns, are taken from the ship and housed in a government camp inside Johannesburg called District 9, which soon turns into a slum. In the first decade of the 21st century, Multinational United (MNU), a private military contractor, is placed in charge of policing and relocating the now 1.8 million aliens to District 10, a new camp 240 kilometers northwest of Johannesburg.

Brilliant stuff. When you didn’t think it was possible to come up with a new idea for a movie, it just suddenly happens. At least I’ve not heard of any movie plots like this one.

District 9 starts out as a documentary, but after a while it changes genre into a full blown action movie. Writing more about the plot could spoil some of the movie for you, so I’ll shut up now so you can actually go see it. So, in the end, this is not much of a review, but the main message I’d like to get through here is that you should really, really see this movie.

By the way, if you suddenly get a strange crave for cat food after you’ve seen District 9, fear not - it happened to me as well.

Do you have any thoughts you want to share? A question, maybe? Or is something in this post just plainly wrong? Then please send an e-mail to vegard at vegard dot net with your input. You can also use any of the other points of contact listed on the About page.
Yeah, District 9 is a movie to watch. Though luckily I avoided the cat food craving. :)
A great movie indeed, I’m getting the DVD when it’s released. Might even go Blu-Ray on this one. Thankfully the cat food crave blew over quickly.
The big question is; did you try it while the craving lasted?
No. But I don’t really see why cat food should be that bad to eat. I think it goes into my don’t-knock-it-until-you-try-it-pile.
←  Now With Even More Mobile Phone! Going Android  →
Caution