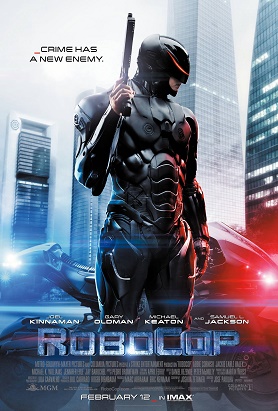 Back in 1987, the original RoboCop, a great, dystopian, science fiction movie, was released. Perhaps not Blade Runner-great, but a movie both critics and viewers could agree was one of the better science fiction piece they’d seen. I was 9 years old in 1987 and I didn’t see RoboCop until many years after its release, but I still remember the cardboard cutouts the 9-year-old me peeked curiously at in the video store: “Part man, part machine, all cop.”

Now, almost 30 years after the release of the original RoboCop movie, Hollywood has decided it’s time for a remake. With all its modern computer graphics, the 2014 version should easily blow the 1987 version out of the water. Right?

I’ll have to admit it’s been a while since I saw the original RoboCop, but I should still be capable of comparing the two. Maybe comparing them isn’t really the right thing to do, a movie should perhaps be judged for its own achievements and not by how it compares to whatever movie it’s based on, remakes, prequels or sequels. But it’s still very natural to make the comparison. When you go ahead and remake a science fiction classic, you are digging a huge hole it’s easy to fall into: Your movie will be compared to the original version.

When you go to see a movie called RoboCop that is supposed to be about a cop that is part man, part machine and all cop, what do you expect to see? You expect to see RoboCop, of course. That was exactly what I was waiting for, and it felt like I was waiting for an eternity. I do appreciate that the director, José Padilha, felt he had to first make the main character, Alex Murphy, human before he could tear him apart and make him into a machine, but did it have to take that long? I can’t be sure, but I think it took at least 45 minutes before we got our first glimpse of Murphy in his RoboCop suit.

And when the action starts for real, the movie is almost over. I know I my usual complaint is that a movie is too long, many tend to break the two and a half hours and even three hours mark these days, but in the case of RoboCop, the problems isn’t that the movie is too long. It runs for a little under two hours, which is pretty much perfect, but it doesn’t spend its time well. There’s too much dicking around before the big ball of fiery action starts to roll.

In other words; too much talk and sugary feelings, not enough RoboCop.

The visual effects in RoboCop are great, and they put the 1987 effects to shame. But of course they do. With almost 30 years between the movies, nothing else is to be expected. While the more complicated visual effects in the 20th century RoboCop relied of stop motion - of all things - everything in the 21th version is computer generated. And if there’s something Hollywood knows, it’s computer graphics. They do manage to create an appealing version of a not-so-distant-future Detroit, in the same way as the original movie: Just enough future tech to make it believable. What I fail to understand, though, is the future’s fascination with transparent computer screens: Tablets, computers, TVs; they are all transparent. Why the hell would you want to let people see what you’re watching all the time?

The 2014 version of RoboCop doesn’t really match the 1987 version. But, if nothing else, the 2014 RoboCop really makes me want to watch the 1987 RoboCop again. So much, in fact, that I just ordered it on Blu-Ray. Perhaps the remake is just an elaborate marketing campaign for the old movie? Either way, it worked on me.