“Starship Troopers” by Robert A. Heinlein 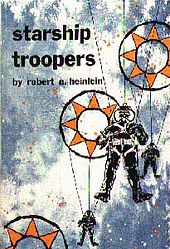 Ah, Starship Troopers. You saw the 1997 movie, didn’t you? Denise Richards’ break through as an actress, a decent performance by Doctor Doogie and that guy from The Wire and a lot of well-below-average performances by other actors and actresses who didn’t really manage to move their careers beyond Starship Troopers. Mix that in with some - by 1997 standards - great visual effects and you got a movie that would entertain anyone with a taste for the sci-fi or gore genres for a couple of hours.

But this review is about the book and while the it’s very different from the movie, it’s in many ways much better. For instance, the book is a lot more intelligent. We follow Johnny Rico’s journey from high school graduate who enlists, not because of a girl - like in the movie - but for other reasons, all the way to when he makes it to Lieutenant. The character develops, which isn’t really something we can say about Johnny in the movie. While the movie is mostly action, bugs and gore, the book is filled with ethical and moral discussions, both through Johnny’s own monologues and conversations he has with his parents, squad mates and superior officers. Everything from the pros and cons of the past’s birthright of being a citizen (who can vote) and the yays and nays of capital punishment is being discussed. I can’t help but suspect that most of what I’m reading is Heinlein personal opinions mouthed by Johnny Rico.

All in all, I’d recommend that you read Starship troopers. Not so much for its action, which makes up about 40 of the 220 plus pages, but more for the way it brings up moral and philosophical aspects of suffrage, civic virtue, juvenile delinquency, capital punishment, and war - subjects that are as relevant today as they were back in 1959 when the book was written. Starship Troopers has sparked a lot of controversy and there’s an interesting writeup about it over at Wikipedia.

On the bounce, soldier!

Do you have any thoughts you want to share? A question, maybe? Or is something in this post just plainly wrong? Then please send an e-mail to vegard at vegard dot net with your input. You can also use any of the other points of contact listed on the About page.
Now you’ve got me interested.
If you plan to read the book, I ordered my copy from Amazon - but you can probably pick it up at a local bookstore.
Yes, it’s amazing what you can find online nowadays. I have a couple of bookstores in mind though, and even one that might have the book in English. Plus human interaction! Yay!
←  How to Drink Whisky Oslo-Nesodden  →
Caution