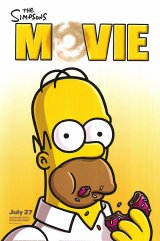 I’m a great fan of the The Simpsons cartoon and proud owner of all the seasons released on DVD so far. I’ve seen each of them at least twice, which does not make me their number one fan by far, but I’m at least among, say, the top five million.

If you have seen one of the three trailers for the movie, you have probably noticed that it’s simply impossible to figure out the plot. With some movies you really don’t have to see anything but the trailer to know everything about it, which can be a good thing because you save a lot of money.

So when you sit down to watch The Simpsons Movie you have no idea what to expect and I’m not planning to spoil the fun by telling you about it here. The movie is like seeing four The Simpsons episodes in a row, for me it was quite a few laughs, but I never had any problems breathing at the same time. That said, it’s all good fun, Simpsons style. I’m not sure why FOX let the writers kick them in the nuts so often; but I’m guessing it’s because the family of five is a gold mine for the network.

I’ve read a review where the author complained about the low quality of the animation and compared it to the works of animation studios like Pixar, writing that the animation in The Simpsons Movie far below Pixar’s superior quality. I’m not sure how it’s even possible to make that comparison as Pixar works exclusively in the 3D animation realm and a Simpsons movie made up exclusively of CG graphics would have looked plain stupid. Even though there are some CG in The Simpsons Movie, they are mostly sticking to their faithful Korean 2D drawers and I love it.

This movie can be watched by both hard core fans and people who are not at all familiar with the Simpsons. There is something in there for everyone, but I guess that the fans will be the ones getting the more subtle jokes.

And remember, the movie is not finished before the end credits are over. Sit through it all and you’ll be awarded.