Just as I started to write this entry, I remembered that tomorrow is the big to-be-or-not-to-be-day when it comes to my future at NRK. You probably know this by now, since I’ve been reminding you about it in pretty much every entry after returned from my…uhm…break. So, I browsed through 20-25 ads, wrote one application and felt that I probably should’ve written more. The problem is that I’ve still got some hope about an extended contract with NRK. I’ll probably write a couple more tomorrow evening if things don’t go exactly as I hope.

I took a walk outside about an hour ago to see if I could find somewhere close to throw away all the metal cans that have been piling up in the kitchen in the last month. Yeah, the closest place to throw them away is of course is garbage cans just outside the apartment building, but I’m raised well, therefore I recycle. I think that I think, therefore I think that I am. Walking from the apartment it was kind of slippery, it’s around 0 degrees centigrade and rather foggy outside at the moment, making the conditions very unpredictable. I’m glad I didn’t take my bike. And I was able to find a place to throw the cans away, too.

Surfing around, I found an article about some woman who sues Schwarzenegger for defamation.

A Hollywood stunt woman who claims she was sexually harassed by actor Arnold Schwarzenegger filed a lawsuit Monday alleging defamation by the governor and his campaign staff.

The complaint alleges that less than one hour after her news conference October 6, Schwarzenegger’s campaign staff “disseminated to dozens, if not hundreds, of media outlets, reporters and editors an e-mail … that Rhonda Miller was a felon with a long criminal record.”

The source of all this ado is that the day before Schwarzenegger was elected California’s governor, Rhonda Miller spoke at a news conference alleging “outrageous acts” of sexual harassment by the bodybuilder-turned-actor-turned-politician.

The question is: Did Arnold Schwarzenegger sexually harass Rhonda Miller?

This is Rhonda Miller: 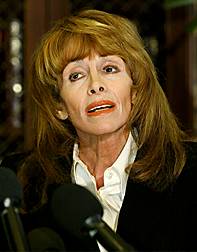 Do you have any thoughts you want to share? A question, maybe? Or is something in this post just plainly wrong? Then please send an e-mail to vegard at vegard dot net with your input. You can also use any of the other points of contact listed on the About page.
Good luck with NRK, man!
What if Arnie actually did harass Rhonda Miller.. what does that say about him??? yuck! btw.. didn’t she play that mumified princess in "Return of the Mummy" ??? :P

Note to NRK: Stop mucking about and give V a permanent job! Since I pay your "you own a tv" fee I feel that I’ve got some say in this matter..
whats the logic behind waiting 12 years before filing a law suit? I think it is less a case of I-was-fondled-and feel-abused and more an example of Hey-this-man-actually-won-and-I-can-probably-make-some-money-and-give-him-some-bad-PR-at-the-same-time.

and hey… if she wins this lawsuit, she will actually have it in writing that a man touched her breasts.
LOL

:-D
He should be able to blame something. Like beer. Or that he’d passed out and she fell on him.
←  X-mas shopping Please remove Rhonda. I want to sleep again  →
Caution